We have noticed that you have not turned accessibility on. To turn on screen reader adjustments, click Alt+5
Only left for SAME DAY SHIPPING!

This week I had conversations with two separate women, for whom I have so much respect. One is a wonderfully supportive friend, in a similar stage in life. She has been working in a career she likes, but does not love (as I was just a few years ago). She has a passion for animals, but is not quite sure how to pursue that while also bringing in an income. She has been married for a while now and plans to add to her family soon. We got into the discussion that so many woman have at least once in their lives...to work or not too work. So, we both want children, we both have a natural ambition and drive that would classify us in the "Type A personality" class, but we are both a little torn when it comes to the big debate about working as a mother. I, obviously, am planning to work as a mother, as this business is such a huge part of my life, but know that when that day comes I will find myself torn between spending hours at the office or time with my little angel playing on the floor. I have always believed that there has to be a way to have both, as many of the working moms around the world have proven, but I can't imagine how difficult that will be. I can also completely understand the decision to become a stay-at-home-mom, as the older I get, the more I understand what very little time we have with the most important "job" of our life!

My second conversation was with someone I consider to be a new friend, a complete sweetheart, a new mom, who openly shared her experiences with me. This fabulously talented lady has spent years in the industry making her mark. She worked her way through multiple successful careers that many us women would majorly envy - lets just say she spent years writing fabulous fashion stories for a very well known website and has her own TV show about shopping! Okay, now that we are all dying of jealousy...she is just like many of you new mommies out there, facing those same decisions. As we were discussing her new mommy status, she made such a good point, that motherhood is like this secret society where you all have this one major thing in common, your precious little creations that are now the center of your universe.

I realized that no matter who you are, or where you are in your career that motherhood changes everything. I also realized that although I already had so much respect for moms, it is really so much bigger than I can imagine. The balance, the responsibility, the physical demands, the mental exhaustion, the incredible rewards - I don't think anyone can comprehend the true depth of this role until they official become a member! I know 100% that I can not wait until the day comes that I will have a little RuffleButt of my own and officially join this club, but in the meantime, I will continue to have an indescribable amount of respect for the mothers of this world!

This is Veronica, the new intern over at RuffleButts! Hope everyone had a great Memorial Day weekend spent with family and friends. I am thrilled to be joining this business and I wanted to share with you all a little bit about me: I am a children's wear designer entering my senior year at Parson's School of Design (ever seen 'Project Runway'? That's filmed at my school!). I am currently back home in South Florida for the summer and working with Amber and the RuffleButts team. I have already learned so much about what it takes to run a business and working within the apparel industry. I am grateful for Amber and all the one-on-one time she spends with me as well as anxious to see where we can go with this exciting brand over the next couple months.

One of the many wonderful aspects of working in children's wear, and specifically at RuffleButts, is how pleasant and caring everyone is--both workers and customers alike!
Thank you for your continued support and I hope to be in close contact with you all for the duration of my experience here.

Adding to the team 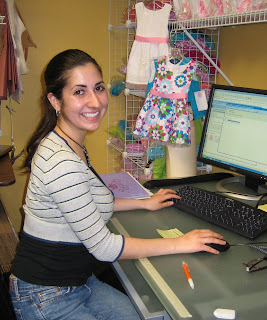 I am so thrilled to introduce you to our newest addition to the RuffleButts team, Veronica Cohen! Veronica has joined us for the summer from Parsons School of Design in New York. She is such a breath of fresh air and a ginormous help here at the office. With her design experience and education, along with her so admired organizational and perfectionist qualities, she is the the perfect compliment to Kristen, Mark and me!

Our first week has been one of chaos, as usual, but she is fitting right in and we have gotten a ton accomplished. We have scheduled our first official "PR Project" and "Spring 09 Design Week", and with 4 sets of hands around here now, I think we will finally get a system of organization. Okay, I know, I'm probably dreaming a bit, but at least we are getting close!

It is and always will be extremely important to me to surround myself with nice, considerate, hard-working, and ethical people. I am so happy to say that with our RuffleButts team, and our shared-office team of GMC Mortgage, I am surrounded on a daily basis. I am still human and there are definitely days when I just don't want to work, but I must say, overall, I feel so very fortunate to do what I do, with the people that I do it with!